Why a fairytale should be considered as a movie for females you may ask. Well if you have seen the first part you would know that Alice is a strong headed girl who defies the norms of the 19th century society, she would much rather be independent than to live with a man for his wealth. She is an amazing example of how girls should be in the modern day as well. This has been depicted in an epic fashion by Mia Wasikowska. 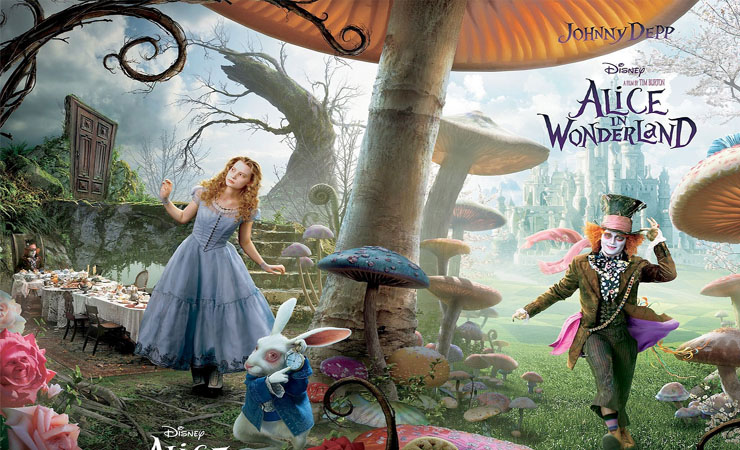 Alice in wonderland was a dark fantasy movie according to its genre. It was released by Disney motion picture studios. It casted some amazing actors like Johnny Depp, Anne Hathaway, Mia Wasikowska and Helena Carter. The movie was directed by Tim Burton and was written by Linda Wolverton (an adaptation of Lewis Caroll’s book Alice in wonderland). The movie Alice in wonderland was released on 12th of February, 2010. The movie was in 3D and was enjoyed by a lot of its audience at the cinema. The film made $1.025 billion through the movie worldwide and made about $1 billion in ticket sales. It is considered Tim Burton’s most successful movie to date and Johnny Depp’s second most successful movie after pirates of the Caribbean of course.

First off, I would just like to say you have 3 months before the movie is released so I would suggest that you go buy the DVD watch the movie yourself, it was an amazing movie and you won’t have as much fun if I just tell you the story, I still will though because, well I love telling stories. Some of you might want to read it because you don’t have the time to actually watch the movie sometimes you can’t remember a movie released back in 2010 and that’s alright because I love telling stories!

Alice Kingsleigh was a 19 year old girl whose father had passed away. She kept having a recurrent dream that bothered her. While she was attending a party at the Ascot estate she faces an unwanted proposal to Hamish Ascot. She was not sure how to reply so she just started following a rabbit that ends up taking her to a rabbit hole in which she fell accidentally. She then reaches the wonderland where she sees a forest. And is welcomed there by an argument of whether she is the right Alice. She sees the white rabbi, Dormouse, Tweedledee and Tweedledum and dodo, she also sees talking flowers. She is greeted by the argument whether she is the Alice who can restore the white queen to power by killing the Red Queen’s Jabberwocky, this is apparently foretold by a caterpillar, Absolem.A group of playing card soldiers and Bandersnatch end up finding the group out of which few including Alice, Tweedledee and Tweedledum escape into the forest. The knave steals the Caterpillars scroll and Dormouse steals the Bandersnatch’s eye.

Meanwhile the Knave goes to the Red Queen and tells her all that he reads in the scroll and how Alice can threaten her kingdom. Alice on the other hand meets Cheshire he cat who makes her meet hatter and the hare. Hatter saves Alice from being captured by letting himself to be captured by the queen instead and Alice is discovered by the bloodhound Bayard. She is greeted by the Red Queen who does not realise that Alice is the one who will end her reign. She discovers that the sword that can kill Jabberwocky is in Bandersnatch’s den. She hen befriends him by returning his eye and aces the sword in return. The knave in the meanwhile tries to seduce Alice who does not return the liking but the Red Queen being jealous orders her to be beheaded. She manages to escape on Bandersnatch’s back and delivers the sword to the white queen while Hatter is saved Cheshire Cat and Hatter announces that a rebellion be begun against the Red Queen. This is momentarily stopped by the Jubjub bird but the battle is soon decided.

As advised by Absolem Alice slays the Jabberwocky and the white queen wins the battle. She then gives Alice a vial upon being drunk sends Alice home. Ascott decides to make Alice his apprentice for trade routes to China and everyone lives happily ever after.

6. Alice Through The Looking Glass 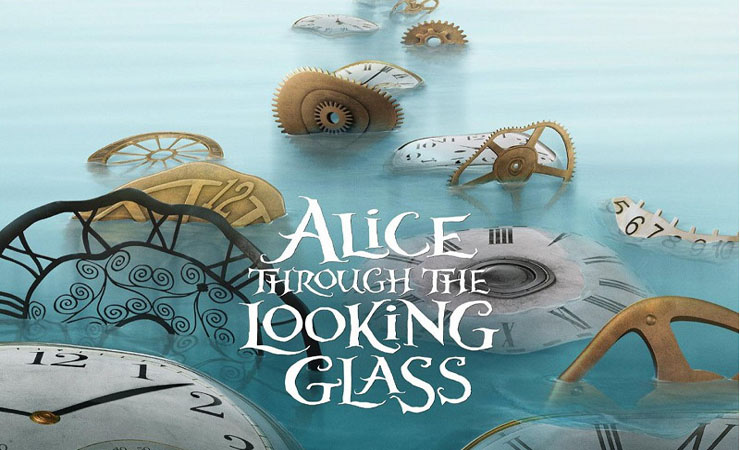 Alice through the looking glass is what happens after. Most don’t know this but a sequel of the book had also been released. The movie is also coming out this year. It is being directed by James Bobin and is again written by Linda Woolverton, the writer who also wrote the first part. The movie is being set to be released on the 27th of May 2016.

“Why to watch the movie? Well if Alice can break free from the norms of society back then, I should hope the movie convinces you to do it in today’s world.”

Alice Kingsleigh has been following her Dad’s footsteps and has been travelling for trade. When she returns home however she finds a magical looking glass which she uses and returns back to wonderland and she meets all her friends much like before but it is not the happily after she expected. Hatter is not himself anymore and he seems to be dying. It is again up to Alice to save the day. The story basically goes where Alice returns to an earlier time to save Hatter and finds her friends in different times of their lives. It seems interesting enough as we discover all the characters we already adored in depth. It will be a fun watch for all those who have seen the prequel more than those who have not. Nonetheless it seems like a movie that should make you head out to the cinema. 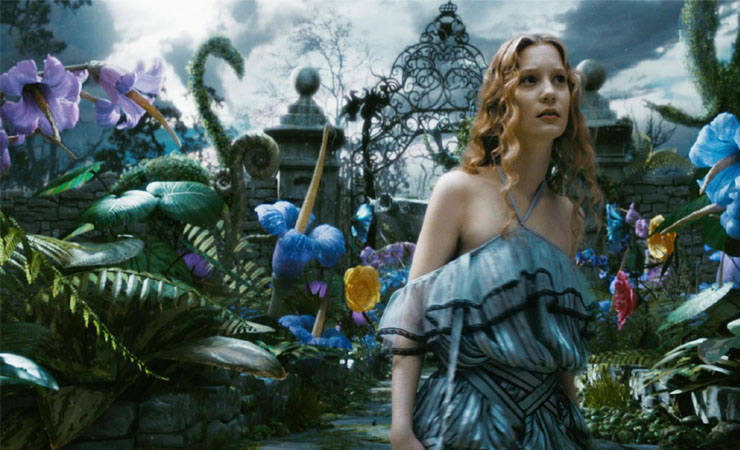 For the first part of the movie Mia Wasikowska proved to be amazing as Alice as she read up on how 18th century girls were supposed to behave and acted completely opposite to the norms. She performed beautifully. She is basically an Australian actress and director. She got recognized all over the world after Alice in wonderland and got an award for her comedy series the kids are all right.

“Past shapes our personality let’s see how the personalities of the creatures in wonderland have been formed while getting to know them deeper.” 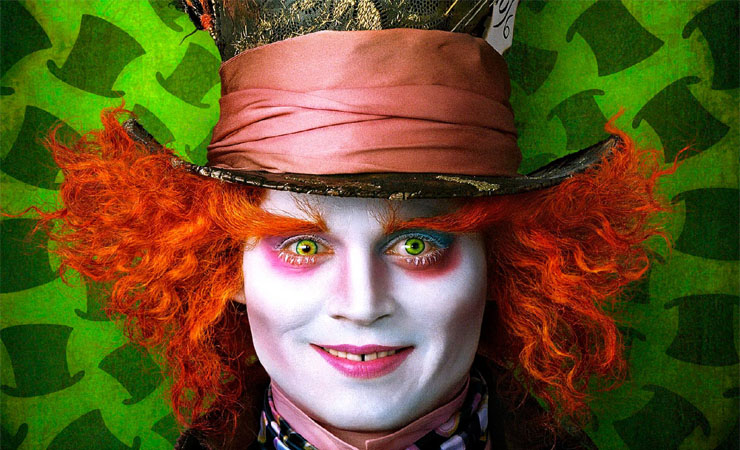 Famous for the amazing transformations of not just his looks but his personalities in different movies, this man is a remarkable actor. He did as very well as the Mad Hatter an is so exciting to see him return. The lead role in pirates of the Caribbean has been one of his greatest accomplishments. He is not only an actor but also a musician and a producer. Another great fantasy he has acted in is Charlie and he chocolate factory.

3. Helena Bonham As The Red Queen 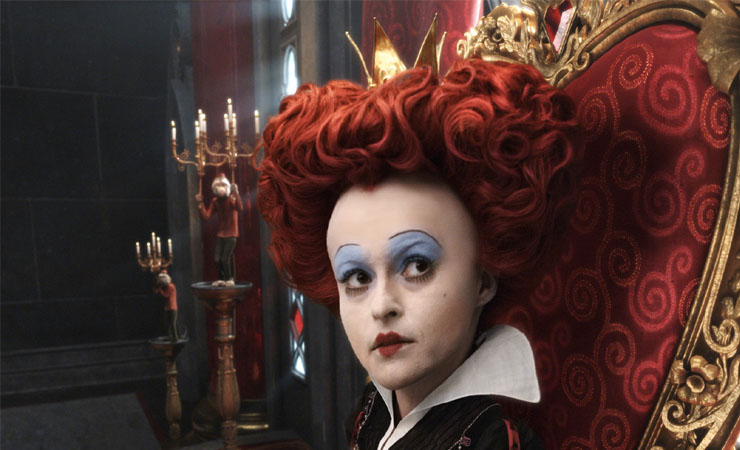 A very blue blooded British actress, she has been acting since 1983 and has reached great heights. Her versatility is her greatest traits as she has performed several roles of different kinds. She has worked with Tim Burton many times in the past again including Charlie and the chocolate factory. Her other characters working with him include; big fish, the heart of me and the planet of the apes. 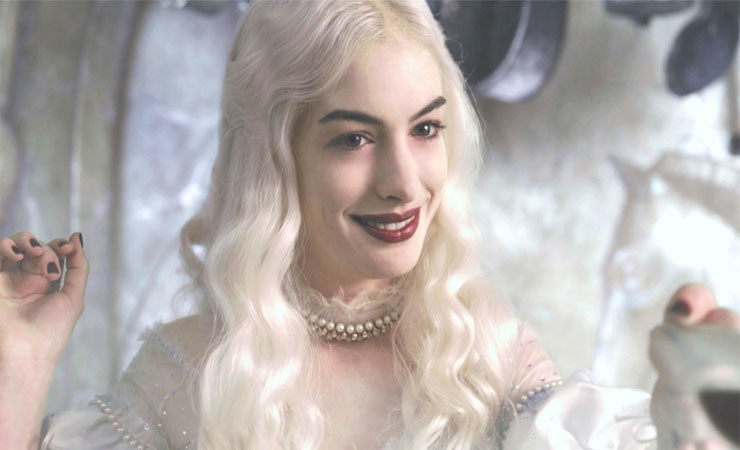 1. Alan Rickman As The Caterpillar’s Voice

Let there be silence for a moment as this is going to be Alan Rickman’s last movie. One of the greatest actors of our times, Rickman was known for a variety of roles the most famous being that of Severus Snipe in the Harry Potter series. His death was mourned by millions of Harry Potter fans around the globe. He passed away on the 14th of January 2016. He will always be remembered. You can hear his voice one last time in Alice through the looking glass.

Why Should You Watch It?