Mila Kunis, original name Milena Markovna Mila Kunis, was born in 1983, 14th of August. She was born to a Jewish family in the Ukraine, formerly known as the USSR. Later they shifted to Los Angeles, California to pursue better lives. Mila started acting at the age of 9 and her father was quite convinced with her skills. She did some TV commercials and some short appearances in TV series during her early teens. In 1995 she played Melinda, in Make a Wish, Molly which made her a celebrity. Though people got to know her when Kunis was offered her first career-changing, more significant role, as Jackie Burkhart, in the “That 70’s Show” this can be called her first break.

Now we’ll come to the lesser known facts about Kunis!

These facts help her fans relate to her more easily. Those who know her know this really well that she is a very down-to-earth person. Regardless of her safety reasons, she stops by to give autographs to her fans and she never fails to greet her fans with a warm smile. She has been voicing Meg Griffin since 1999 till date and she chose to voice another project that will be released later this year, Hell & Back.

She is beautiful inside out, even under all that makeup she has to do in order to face the camera. But when you talk about Mila Kunis & other celebrities without Makeup, she is just as human as we are. Underneath the makeup she is a round-faced chubby lady who needs a lot of contouring done in order to pull off that glamorous look which everyone drools over. Her skin, though I must say, is pretty perfect even after going through all that layered melodrama of cosmetics.

Right now she is happily married to Ashton Kutcher and they both have a cute little baby girl, Wyatt Isabelle Kutcher. There have been rumours that she will quit working after her baby but she has waved them off by casting in Jupiter Ascending and a few upcoming projects after giving birth to her little girl. However she says she does not mind being a stay-at-home mom for her little girl. All in all, she is just as amazing in person as she is as an actress and is just as human as all of us without the makeup on. 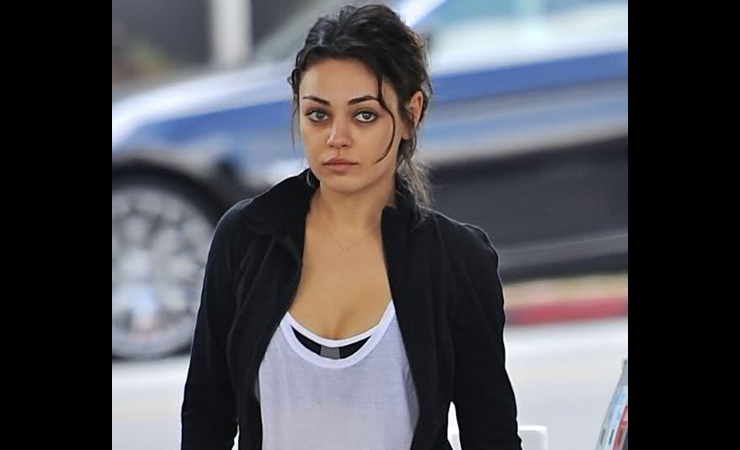