If you are really into symbols and are looking for a tattoo to show off your symbolic acumen while retaining your professional attire? Do you want to deliver a strong message with your tattoo while maintaining pain level to a minimum? Then what you need are small tattoos for women with meaning. Here are some designs to quell your hunger for such designs.

The Yin-Yang is an ancient symbol found most frequently in the Chinese civilizations. This small tattoo carries a large number of plausible meanings with it. It symbolizes balance between darkness and light, truth and untruth, evil and good. You can wear this tattoo to show that you are in touch with your vices and have the wisdom to suppress them. It also depicts that you have a connection with your mystical counterpart. Sometimes it is also shown as a Sun & Moon symbol. 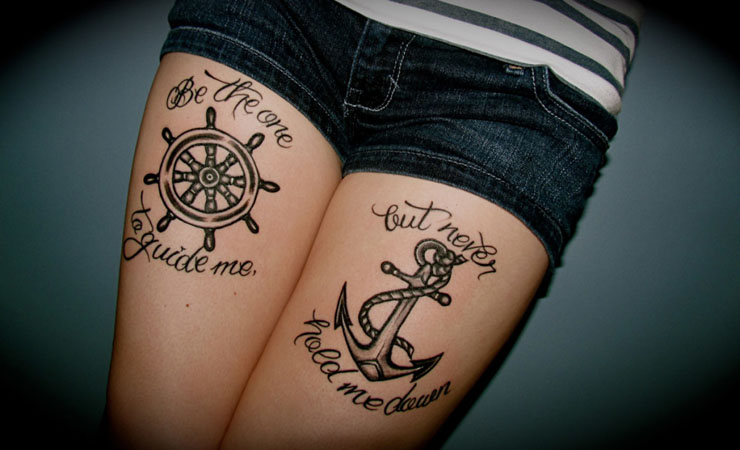 Most people think that this is one of those small tattoos designs with meaning that are restricted only to sailors but this is not the case. It can be worn by anyone who wants to show off stability and firm convictions and beliefs. It symbolizes that the wearer has the ability to make fast, firm decisions and will bear with them to the very end. It also shows that you have something dependable to hold on to.

This small tattoo has a fantastical meaning associated with it. The sea horse displays an owner’s inclination towards the more eccentric side of life. It may be used as a self-motivating symbol for aspiring inventors, architects and designers.

This tattoo looks particularly cool when it is small. Moreover, this tattoo also has great associated meaning. This shows that the wearer has a connection with the wolf spirit. This wolf tattoo meaning symbolizes the power of the wolf spirit that imparts instinct, intelligence, a sense of freedom and signifies the importance of social connections. The tattoo can also be used as a signet for a society or a group of like-minded individuals. A striking choice if you for small tattoos with meaning!

This small tattoo with meaning illustrates the importance of the universal language of music. It is a way to show appreciation to music. It is also a symbol of a universal driving force that affects not only the educated but also the not so fortunate of us.

Tatting yourself with zodiac signs are a way to express your belief in horoscopes and the fortune they foretell.

The above-mentioned small tattoos with meaning will provide great help in choosing a worthwhile symbol for yourself. You may chose a Pisces symbol or a dog paw, what people think of it really does not matter. What does matter is whether you can live with that permanent mark on your skin and bear with it till the very end without embarrassing yourself in any way.

Related Article: Best Place To Get A Tattoo For Women