There is not even a single soul in the whole world that is not mesmerized by the amazing world of Disney and their supernatural and mesmerizing movies, shows or characters. As the kids grow up, their love for Disney does not fade away and they express their love in the form of tattoos. If you are also among these and can’t decide which Disney tattoos for women idea will be the best for you then you have come to the right place.

It is one of the most popular Disney tattoos designs among all the girls. As it is beautiful flashy and so colourful. It suits best if it is in a small size and you can have it anywhere on your body. It also attracts quite some attention towards it.

The castle which has become trade mark of Disney by now is so famous and is more than an attraction. Many people are getting it tattooed and it looks amazing on the back of the neck and a semicircle over it looks just like a rainbow. It also is something very different from usual.

Another of the characters of the Disney; it is very famous among the girls and is the best place to get a tattoo. It also has a feminine touch to it as well. Looks beautiful on your wrist and is very noticeable when you wear it there. Shows your love for your favourite character which kept you mesmerized the whole of your childhood.

Mickey, the most famous animated cartoon character on the face of earth and you often see people proudly wearing tattoos of it but this mickey tattoo idea mentioned here is completely different. Both the hands of mickey forming a heart shape which is very famous these days hence you will be having a dual purpose tattoo and suits both boys and girls equally well.

There are so many Disney tattoo ideas but this one is new just out of the box. Looks very well on girls and is very flashy vibrant and so attractive. Have any sort of flowers which ever you like tattooed on your upper arm and be sure to have a big one in the centre and the small ones surrounding the big one and have Simba’s face tattooed in the centre of the big flower. It will look so classy. 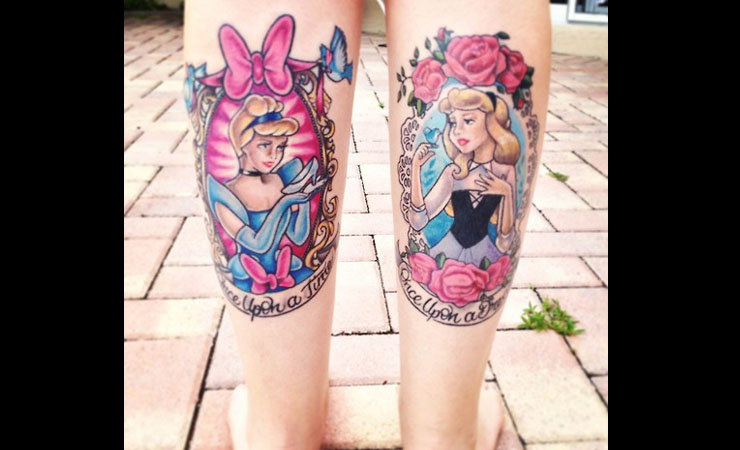 Cinderella is another of the Disney’s famous character and there is no child on the planet earth who does not know Cinderella. Many people sport Cinderella’s tattoo itself but if you want something different go for the animal friends of Cinderella. The two mice and the sparrow with the shoe and the pumpkin in the background. This will look very beautiful.

If you are a funky boy and the above tattoos are too childish for you then go for Davey jones from the pirates of the Caribbean. Have it on your upper arm and be proud of its creepiness. It is a great Disney tattoo idea for the big boys.

The Disney tattoo ideas mentioned here are very different and completely out of the box making you look different among the crowd and you can proudly show off.