Nicki Minaj is a female rapper who started her career from the early age of 19 and now at the age of 32, is breaking records. She was born to a Trinidadian family on 8th December, 1982. Her real name is Onika Tanya Maraj. Her success story is all about not giving up and believing in your self. As a singer and rapper, she has come all the way from being ‘nobody-knew-she-existed’ to leading the MTV international music charts celebrities. Today she is a pop icon who is on everyone’s mind. She got there slow but she did!

Nicki is famous for experimenting with her looks, her hair colour and her makeup. And she makes sure it goes with her the-cool-rapper image. For Nicki, black is her original hair colour but she is never afraid of experimenting. She has changed her hair colour from a deep black to an ash blonde and from a blonde to a bright pink. She has also gone that extra mile with giving her hair that oomph of colourful cheetah print. Yes! You got that right. She actually embraced the cheetah print on her head and that too in vivid colours. Her experimental looks literally shout out at every event “Let Them Haters Hate!” while she always manages to smile.

Her skin is pretty much like those of Asian people, nice and flawless without any freckles or anything. Which means Nicki Minaj & some other celebrities without makeup also has a beautiful skin. However she is just as human as you and me and humans are not perfect. So to make us all feel a bit better; she literally has no eye-brows.

There has been some news regarding her getting some surgeries done on her body parts. It said that she got her breast and hip job done to make it more prominent. Moreover, the news also brought forward her before and after surgery pictures which pretty much proved what was claimed in the news.

What’s bad about her is that she talks about other girls (mostly trash, yeah). Rest everything is quite cool about her. Kids, teens and even people in their 30’s have been seen rapping alongside with her songs. You’ll hear a lot of news about her personal life, her breakups and how she is rude to people, but that’s the thing with being popular, everybody gets to talk about you! 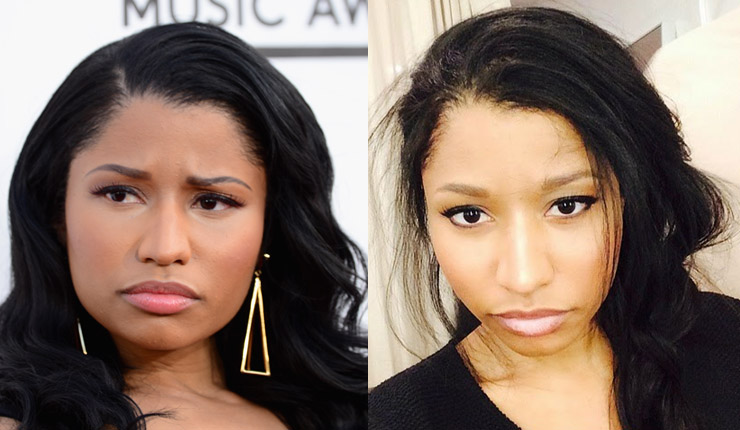